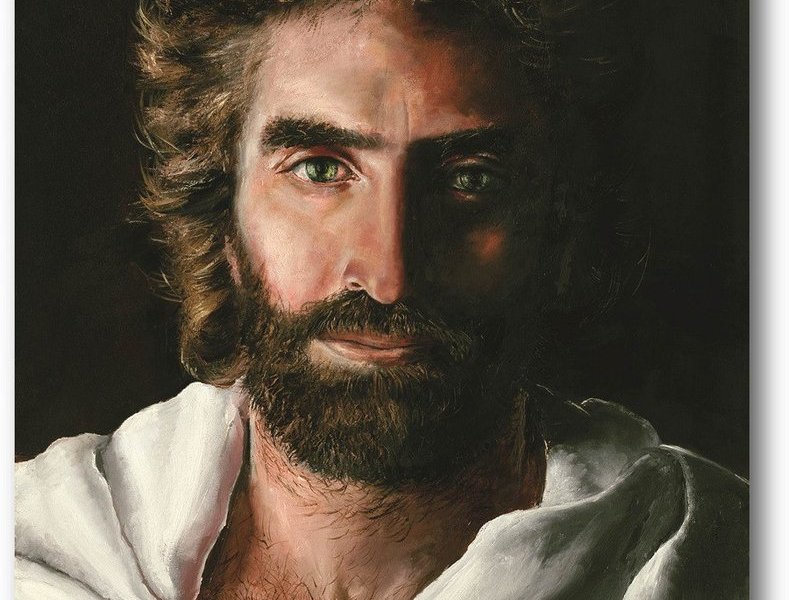 You know how it is. Can’t sleep. Look at the clock, its 2:42 am.  Try to get back to sleep, perhaps I do. Look at the clock, this time its 4:15 a.m. Its Saturday morning and although I tend to get up early, this is a bit much. I’d like a few extra hours to sleep since its the beginning of the weekend.

So as I’m lying in bed, I have a few thoughts.  I think to myself definitively, “I don’t want to think about this!” so in the twinkling of an eye, I envision myself at the foot of the Cross, looking up at a horribly scarred body of Jesus nailed to the Cross. His head is hung down and I can’t see his face but I see the crown of thorns on His head.

Within another flash my mind goes to an image of Him standing in a boat. He’s teaching; sharing parables with listeners. And then it happened.

I know I wasn’t asleep, but I know my eyes never opened as well. My “not-a-dream-encounter” occurred. Just as vivid as watching a movie. In fact, it was just like that.

I was 4 feet away from Jesus. As He’s depicted and clothed in Akiane Kramarik’s Jesus Prince of Peace painting of Him. This is the same image of Him that I have loaded onto the iPad on my desk at work, that continuously displays pictures of my family and friends and Him. Its the same picture that I pray to for guidance, ask for forgiveness, and ask Him to intervene with someone and some situation that I’m aware of. This is the image and person of Jesus that I’ve come to recognize and know in my daily life.

Jesus turns 180° around. He and I are surrounded by people who I can’t recognize. I know they’re people but I don’t see their faces. I just know they are there. As He turns I reach my arms out to Him. He extends His arms toward me. We grasp each others arms. He says to me “KEN! I’m so glad you’re here!” He has the warmest eyes and is truly glad to see me.  He welcomes me like I’m a friend he was expecting to show up at a party where He’s the host and the Master of Ceremonies.

If ever I had doubts about being in heaven, they quickly vanished as I saw His face and heard his greeting. I felt it. I felt it deeply and warmly. I felt welcomed, honored and felt extremely glad to be there.

With some mixed excitement and anticipation, I began to ask about…you know how it is. You begin to say a word, a phrase or thought, and its as if He mind reads you.

My thought is about Marissa, and as the scene evolves Jesus releases my arm, extends His right arm and turns toward His right and the people who are there part and create an opening, as if the sea were parting. With a smile Jesus begins to say “I have someone…” then I hear…

Marissa steps through then runs toward me from some crystal, translucent “space,” but its as if she’s stepping into and returning into her 13 year old body that is fashioned and “provided” for me so I could recognize her.

In what seems like a few seconds but what also seemed like minutes, we embraced, I squeezed her tightly, I kissed her cheeks like I always did, I cried what seemed like hot tears for minutes, but there were no tears streaming down my face, and I told her “We missed you.”

When we relaxed our embrace, I said “Mom and Gabriel…”  My thoughts were about their loss, sadness and grief.

Then, with what I can only describe as seeing her eyes widen and her face beam with a mixture of joy, glee and excitement that words don’t do justice, she began to say “Let me show you…” and she turned to her right, I turned to my left, and we began to move in that direction. In that moment my concern was replaced with wonder and awe about what she was going to show me.

Then it ended. My not-a-dream-encounter with Jesus and Marissa. The vivid movie ended.  Wow is an understatement. I lay in bed and marveled at what I had experienced and what I had been shown.

I was thankful that Jesus gave me this moment. I knew I wasn’t gone but I know this could be considered a foretaste of what is to come. As much as I was overjoyed to be reunited with Marissa, yes, my thoughts were for the two people who are closest to us that we left behind.

In His and her joy, Jesus and Marissa wanted me to know and to convey that we were only apart physically, and, in that brief exchange, to encourage me and subsequently to encourage anyone who loses a loved one, that there is some divine and heavenly way that we’re able to have a connection to you.

Post-dream I’m momentarily saddened because to be absent from Leslie and Gabriel means I’m present with the Lord.  I’m also awestruck about the extreme and other worldly emotion I experienced in my encounter but in closing about my experience, I’m very curious and very encouraged and inspired regarding learning what method the angels use to love and bless us on Earth. Thank you Jesus and thank you sweetie for this momentary glimpse into eternity.